It seems to have taken forever, but really it's only been a little over 2 months since I signed the contract to sell the Turkish translation rights to five of my books. And since they will be releasing them in Turkey in the order they were released here in the US, A Midnight Infatuation is first out of the gate.

Balans, the Turkish edition of A Midnight Infatuation, was suppose to be released in July, but we all know how the publishing world is full of pushed deadlines, late release dates, and downright frustrations. This was no different. I still don't have a solid release date (and this frustrates the hell out of me), but at least the cover is finally done.

I was sent the cover for Balans a couple of weeks ago, but my name was misspelled (missing the last "i" in Christie). I didn't think it would take too long to add that itty bitty letter, but I was wrong. Anyway, here's the completed front and back cover for BALANS. 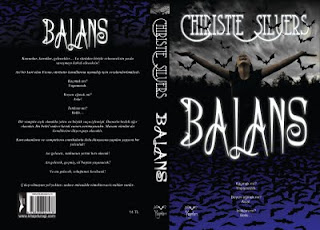 I think it turned out amazing and was ultimately worth the wait. Next up is the big release date, which of course I'll let you all know about when I find out. :)

Posted by Christie Silvers at 12:22 PM