Characters: Getting to Know Chad Langford

Chad is the resident bouncer in Liz's bar, Athena's Ambrosia. At first look, he appears sullen, sour, gruff, but in truth he's a tender soul who wants nothing more than to live a happy life.

Chad Langford was a police officer on the Tremmel Crossing police force when something awful happened. To this day it's a deeply held secret as to what that something was. All we do know is it resulted in Chad "retiring" from the force in his early 30's with a substantial amount of compensation and a lot of mental baggage to last him a lifetime. Liz hopes one day he'll feel safe enough to tell her what happened, but she doesn't push him for the information.

Thirty-five with the rock hard abs of a twenty-five year old, all the ladies love Chad, though he'd rather most of their attentions were elsewhere. His hazel eyes and close cropped hair offer an aura of roughness to his sexy exterior, without a hint of his true inner self. Chad might be a fighter, but he'd rather be a lover. He wants the "Happily Ever After," but will he ever really get it? And will that be with Liz?

Feel free to ask Chad any questions you think of and we'll see if he's up to answering.  :D

Stay tuned next week when it'll be Rick's turn at Getting to Know the Characters of Liz Baker's world.

Posted by Christie Silvers at 8:34 AM No comments:

Characters: Getting to Know Liz Baker

Welcome to the first installment of Getting to Know the Characters. I will try to do one character each week, probably on Thursdays, from the Liz Baker series. We'll start it off with...

Meet Liz.  She's our reluctant heroine in my Liz Baker series.  Liz's life was simple; she thought she was content. Lingering thoughts in the back of her head suggested she might enjoy a more eventful life though.  But she knew she didn't want the husband, family, and white picket fence in her small town of Tremmel Crossing, Georgia. The town was too bland, too boring.

That is, before Liz found out the truth...

Born Lizbeth May Baker, she is the offspring of a human woman with Gypsy heritage and a male vampire with a god complex, though previously thought to be the prodigy of her abusive stepfather. Liz has an older sister, Jesika, who lives hours away and held a grudge against her for many years.

Liz owns a bar called Athena's Ambrosia. This is her pride and joy. She designed and decorated it from the ground up. She loves her loyal staff members like family, and they'd do almost anything for her. She has many loyal patrons, as well; people she's known for years, looks out for when they've had too much, and listens to when they tell the stories of their lives. Liz loves Athena's and all who enjoy their time there.

With a love of brightly colored nail polish, tight jeans, corsets, and tall leather boots, Liz commands attention from any she finds worthy of her curvaceous endowments, and doesn't bat an eyelash at a rambunctious romp in a cemetery. That's where she first discovers the dangers and secrets of her true parentage, and thus, her crazy, wild future in life.

To start your trip into Liz's life check out Time for Death (Liz Baker, book 1). It's always only $0.99 on Amazon Kindle, B&N Nook, and Smashwords.

Posted by Christie Silvers at 9:21 AM No comments:

My Current Work in Progress 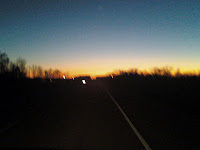 A big thanks to author P. M. Terrell for tagging me into this Author Event. I'm always up for sharing more about what I'm working on. Sometimes I just don't have time to do it. To participate I have to answer 10 questions about my current work in progress, and then invite five more authors to carry the event forward the next week.


10 Questions About My Work in Progress


1. What are you working on now?
I'm currently working on the fourth book in my Liz Baker series, Haunted by Death. This story takes Liz deeper into the paranormal world she was pretty much shoved into kicking and screaming. Being a dhampiresa (half vampire, half human) isn't as fun as you'd think it would be.

2. Can you give us a sneak peek into the story?
At the end of Killer Intentions, Liz is recovering from an abduction by one of her many half-siblings. Her birth father, Gregory, has decreed that Liz will come to him of her own free will, or not at all. Leaving Liz fuming and determined such a thing will NEVER happen. Haunted by Death picks up with the funeral of her attorney-slash-friend, Jim Conrad. After the funeral, Liz comes home to her current roommates, Monty the werewolf and Aimee, another half-sibling who previously tried to murder her.  Yeah, it's a jumble of craziness and extreme stress for our spunky heroine.

3. Why did Liz let Aimee move in with her?
Aimee is another half-vampire, half-human child born of their mutual birth father, and vampire, Gregory. In book 3 we learned that Gregory has fathered several children with human women and he's now attempting to pull his offspring into his dangerous clutches. However, with Liz determined to stay as far away from him as she can, Gregory sent Aimee to "convince" her to come to him. Aimee took it upon herself to use a gun. In the end, Liz, Chad, and Monty decide it's safer for Liz and Aimee if they take her under their wings and protect her, instead of sending her back to Gregory. Thus, Aimee living in Liz's guest room.

4. Why is Liz so reluctant to be taken in by her birth father?
Gregory is evil. Pure evil. Evil with a snide, sneaky side. He seems to want to rule the world, but hasn't really said exactly what he plans to do with all of his children. He wants Liz to come to him, but never tells her why. All of the signs point to some sort of evil world domination, and Liz wants nothing to do with that. Everywhere Gregory goes death seems to follow. Just look at all the death and pain Marcus left behind in book one when Gregory sent him to retrieve Liz. Poor Rick will never forget being strung up and nearly drained to death.

5. Speaking of Rick, will he manage to find happiness now that he's no longer Liz's bed-buddy?
After having a rough time in book 3, Rick seems to have pulled himself out of a slump and moved forward with his life in Haunted by Death. There will be a surprising turn of events for our sweet Rick. He might want to have that tattoo of Liz's astrological sign lasered off soon.  ;)

6. What happens with the "staff" at Adele's estate?
The staff will definitely make an appearance in book 4. Liz's new attorney is trying to convince her it would be best if she moved to the estate and took advantage of all her new found wealth allows her. Liz, however, refuses to leave her home and business. Her bar, Athena's Ambrosia, is her life, her home, and the one thing that centers her back into the normal human world when the paranormal world closes in around her.

7. Can't her bar staff take care of the bar while she's away?
Oh yes, most definitely. Liz has some very trustworthy people on staff who are always ready to help out when she needs it, but Liz is an independent woman who thinks she needs no one. She wants to do it herself, to make herself feel needed and productive.

8. Will we see more monsters in book 4?
Yes! Book four will have the usual vampires, werewolves, and demons we've come to love (or hate) in the previous three books, but this time we'll have a dash of ghosts thrown in. There's nothing like a ghost to disrupt a good time. :)

9. Where will the ghosts be?
A big event will be held at a local historic site in Haunted by Death. An old homeplace-slash-historic hotel full of old furnishings, clothes, and personal items from occupants long gone is the back drop for this event. Unfortunately (or fortunately if you like at like I do), these items also hold their owners' spirits locked in turmoil. **An author's side note: I promised the local historical society that I wouldn't burn down the hotel in my story. So no fires or magical explosions in this book. LOL! **

10. Will there be more books in the Liz Baker series?
The answer is a resounding YES! I have many future books planned for Liz. She has far to many adventures to go on for us to stop now. Besides, she's too darn cocky to let me just ignore her and write something else.  ;)

Posted by Christie Silvers at 8:30 AM No comments: