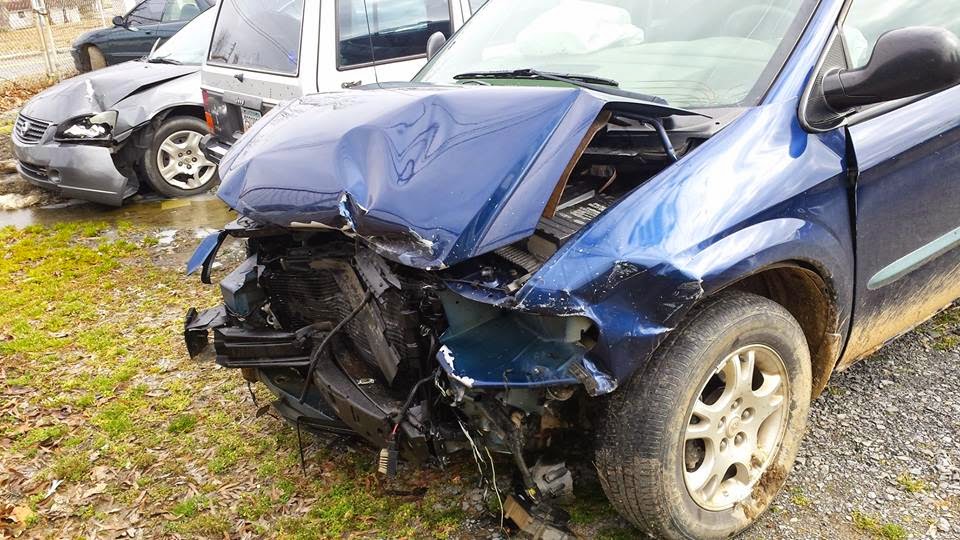 The week after I returned from Book 'Em NC was a cold, cold week here in north Georgia. On the morning of March 6th, the temps were in the low 20's as I took my younger daughters to school. I have a particular route I take on school days. First to the elementary school, then to the high school, I circle around and come through town, before heading back down my road. It makes a big circle back to my house.

On this morning, a woman pulled out in front of me about a mile from my house, only five minutes after I had dropped off my 14 year old. I was only feet from the woman when she barreled across in front of me. My van smashed into the right front fender of her car, spinning it around so the tail end hit the back corner of my van. I crashed into the ditch on the right, and her car landed in the ditch on the left.

This was before the time changed, so it was dark out and everyone had their headlights on. There was no way this woman could have missed me if she had simply looked to her right. Ta-Da! There I was!

Standing out in the cold, we had multiple sheriff cars, a firetruck, EMTs, state patrol officer, and two wreckers pile up in the small area we'd crashed. My BFF drove by taking her kids to school and stopped to come hug me and make sure I was okay. My husband works an hour away, but he made to my side before my mom did (who was 5 minutes down the road).

I was beat up pretty bad. Both knees hit the dash and were soon swelling and bruising. I had bruising down the whole left side of my left leg, my left arm must have hit the door because it was bruised up, I had a bruise from my left shoulder, across my chest, and down to my right hip. And finally, I had such massive bruising across my lower abdomen from the lap belt that I developed three hematomas. Thankfully, after several x-rays, none of these were serious injuries. Nothing was broken. Yay! Of course I looked like someone had taken a baseball bat to me, and the next day I felt like I'd been hit by a truck.

On the upside, the safety features in my vehicle did what they were supposed to do, and no one was seriously injured. Thank goodness!

Here it is three weeks later...

I have my new car (see pic below), the bruises are all gone, the hematomas have shrunk down to only one small one, and the knees are feeling better with each passing day. I'm grateful it wasn't worse, and that my kids were NOT in the van with me at the time. The accident was ruled the other woman's fault and all my medical bills were covered, as well as the cost of my van, and a week in a rental car.

One funny side note: the claims adjuster for my van told me I was so nice to him. He said most people he talks to are just nasty. I told him there was no reason for me to put that kind of negative karma out into the universe, especially since he wasn't the person who pulled out in front of me. And then he upgraded me to a bigger rental car because the kids and I didn't like the tiny Nissan Sentra they'd originally put us in. Wow!  :)

Posted by Christie Silvers at 10:45 AM No comments:

Well, I did it! I made it home from my annual trip to Lumberton, NC for the Book 'Em NC Conference & Book Fair. There were more than 3,000 people in attendance, and my sales showed it. Yay!

Before I left, I was painfully close to running out of books. Eek! You might think that's a good thing, but it's actually very scary when you still have time to sell even more. I guess the only time you should run out is the last minute, right before the doors close. Now that would be perfect!

I met new friends, new readers, and excitedly caught up with old friends and fans. It was a lot of fun. I even did something I'd never done before.... a panel talk!  O...M...G. I thought I'd pass out from nerves before 2 P.M. arrived. Thankfully I didn't, and once I got in there and the discussion started the time flew by. I was shocked when the moderator said we only had 2 minutes left of our 45 minute session. And we actually went over by 5 minutes. The topic was "Creating Other Worlds" and I had a lot of fun answering both the moderator's questions and questions from the audience.

Overall, it was a great weekend, but I'm glad to be back home... until the next one.

I have two books planned for 2015, the first of which will be the start of a new series. I already have several notes and snippets written for this books, but now it's time to jump straight into the writing, feet first. Later in the year will be the 7th book in the Liz Baker series. I'm excited to see these two come to life and find homes with my fans/readers. I hope you'll enjoy the new series as much (or more) as the Liz series. I think it'll be a fun one to write.

Now I'll get back to putting my house in order after the kids had it to themselves for nearly three days. Ugh. And they claimed they cleaned, too.  Uh-huh, whatever you say. Teenagers! LOL.

Posted by Christie Silvers at 1:53 PM No comments: