Last week I posted my 2017 publishing schedule. This week I'm working toward that first goal of getting the short story with Liz and Penny created. The story is titled Sorrow Meets Death and it begins with Penny entering Liz's bar, Athena's Ambrosia. The two sense one another and realize something interesting is going on here. Then, of course, that's when trouble begins.

This is going to be a short story that will fit between Penny's 1st and 2nd books, as well as Liz's 6th and 7th books. Just like the other Liz short story, this one will be a freebie available for download on my website. If you're a Liz Baker fan and haven't read Death Reflected, book 3.5, pop on over to the website and download it.

I'm really looking forward to this story. I've been wanting to tie the two characters together ever since Penny came to me. I knew there had to be a way to bring them together, even just for a short story, and in Devastating Sorrow I hinted at just that meeting.

I hope you'll enjoy this upcoming read, and be sure to pop by regularly for updates about its progress.

Posted by Christie Silvers at 8:00 AM No comments: 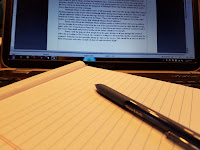 As most of you know, my newest book released back on March 7th. So far, Devastating Sorrow has received a warm welcome and I envision a lot of excitement in Penny Montague's future as more books in her series come to me. She will still fight to control her grief from losing her son, but also fight for those around her. There's a lot to come for her, but before all that, I thought I'd share with all of you my plans for the rest of 2017.

Before this release, my last book came out at the end of 2014. *Gasp* Before then, I was release 2-3 books a year. Throw in short stories and articles, and I was a busy bee. Unfortunately, circumstances beyond my control dictated that I work less on my books and more on family relations (my mother's cancer & passing). I'll never regret that, but it did take me away from the work I love.

Therefore, I'm planning to make 2017 my best publishing year yet! Not only did you get Devastating Sorrow, but I'm planning two more books and a short story this year. Woohoo!!

Keep in mind, the actual dates of releases will be posted closer to time, but for now here is the tentative scheduling.....

Posted by Christie Silvers at 7:00 AM No comments:

My newest book series is all about an immortal named Penelope (Penny) Ann Montague. She's a 150 year old woman who is entirely sick and tired of life. She's tired of living the long, endless days. At night she works as a phone sex operator just to feel some sort of connection to the human race. She certainly doesn't do it for the money. And during her off hours she experiments with her immortality in an attempt to end her long, lonely existence after the death of her only child.

Penny has an annoying younger brother who is also an immortal. Byron Montague is nothing but an annoyance these days. He's a womanizing beast who enjoys the finer things in life: watches, cars, clothes, and other men's wives. If it's pretty and sparkly he wants it.

In their world, Penny and Byron are the results of a birth defect. Born in a time when women lost more children than not, Penny and Byron grew and aged, watching siblings come along, and enjoying their simple life, until one day it wasn't so simple anymore.

Once their immortality was discovered, the two were whisked away to the immortal world. They were raised by an immortal witch who recognizes Penny's affinity for the magic all around us. Penny learned and grew in strength, but Byron--who didn't have a lick of magical talent--was sent away to school.

After years of training, Penny joins the North American Immortal Faction and Byron goes off to college, quickly becoming the party animal he is today. This is where the two are in their stories when Byron shows up on Penny's doorstep, in trouble yet again.

Check out Chapter 1 of Devastating Sorrow to see where that middle of the night knock on the door leads.

It's finally here! Woohoo! Release Day for Devastating Sorrow has arrived and I'm so happy to share it with all of you.

This is the first book in my new Penny Montague series. However, I think my Liz Baker fans out there will enjoy it just as much. There's even a little hinty hint at possibly a future meeting between the two women. ;)

This was a book almost two years in the making. I started writing it a month before my mother was diagnosed with lung cancer. Once her diagnosis came in and I was taking her for doctor appointments, chemo, transfusions, radiations, and all the other stuff that cancer involves, I had to put my work aside to focus solely on her. It took almost six months after her passing for me to pick up the story, again. Today is more of a release for me than just putting Devastating Sorrow out into the world. It's a sigh of relief. It's a point in time where I can relax and finally, after all the struggles we dealt with, say, "It's over." This book release is a cleansing, of sorts, for my writing palate, and I'm ready to move on to the next project. :)

If you're a subscriber to the newsletter you've already received the first chapter this morning. I hope you enjoy it.

I'm still waiting the paperback to go live (it might take a few days), but the eBook is ready for your attention...

Life wasn't always this bad though. When Penny's ninety-two year old son, Charlie, dies in her arms the crushing reality of her long life truly hits her. What else is there to live for without her son? She's ready to give it all up, and has tried multiple times, when her brother, Byron, shows up on her doorstep, trouble on his tail as always. It wasn't until armed guards burst into her home, drag her from her bed, and throw them both into the dungeons of Midnight Manor that Penny realizes this is much worse than Byron's normal scheming.

Midnight Manor is the control center of all immortals, run by an elite group called The Elders' Court. Nothing happens in the world without Midnight Manor having their fingers in the pot. They raise and educate immortal children from an early age and place them throughout the world in positions beneficial to their causes, both present and future. There isn't anything that happens, be it war, arms trades, or scientific achievement, that Midnight Manor doesn't influence.

Penny retired from the Midnight Manor military nearly a century before, but now, in order to save her brother from being tortured for the rest of his immortal life because he slept with the wrong man's wife, The Elders' Court gives Penny the choice to hunt down and return a runaway scientist or risk a fate worse than death and join her brother in the torture chambers for eternity.

Penny, with the help of a few people from her past, decides to at least attempt the retrieval. After all, according to The Elders' Court, the scientist is a danger to all immortals and his research must be returned. Tracking was her specialty during her time in the service.

Posted by Christie Silvers at 9:00 AM No comments: